ENTOMBED A.D. (Sweden) death metal, death`n`roll Two Swedish and world-class legends of death metal are going to perform at just one gig! Death metal fans` deepest dream is about to come true. Luckily, a long-lasting farce concerning changes to a band line-up and rights to the name – Entombed – came to an end. An indestructible loony, Lars Goran Petrov, decided to stop a feud with Alex Hellid. Then he took an old crew ( Olle Dahlstedt – drums, Nico Elgstrand – guitar, Victor Brandt – bass guitar) under his wing, picked a new name for the band – Entombed A.D. – and started to perform. Petrov said in one of interviews that “nothing can stop us from playing music, touring and headbanging”. He`s just a grand death metal maniac. So, one of the biggest death metal legends, endowed with extraordinary growling, will certainly perform hits coming from ‘Left Hand Path’ and ‘Wolverine Blues’ interlaced with songs recorded on a horribly belated album – ‘Back to the Front’ (its sleeve was designed by a Pole – Zbyszek Bielak). As L-G is a complete lunatic, who acts on stage as if he is in his own room, we can be pretty sure that the gig will turn out to be an unforgettable spectacle, regardless of what was happening to Entombed over the past few months. 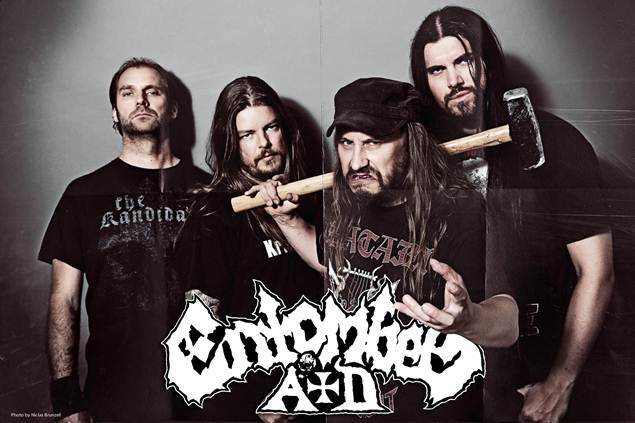 Grave (Sweden) death metal They are considered to be trailblazers of the Swedish death metal scene, which won worldwide acclaim. Although a crew didn`t go as far as Entombed, they have always won profound respect for their faithfulness to ideals and following a death metal path persistently, which is not as easy as it seems. Their leader is the same person from the very beginning – Ola Lindgren. He was the mastermind behind such death metal gems as ‘Into the Grave’, ‘You`ll Never See…’ and ‘Soulless’, reckoned as the death metal canon to follow through, as well as ‘Back From the Grave’ and other 21st century tidbits like ‘As Rapture Comes’ or ‘Endless Procession of Souls’, which are to be promoted during a gig to be done along with Entombed A.D. You may expect a fantastic ‘the Best of…’ songs performed by a marvelous band formed about 30 years ago on Gotland. You may expect a death metal show of the highest order.