The band might be called the legend of the Canadian hardcore music scene.

D.O.A. , formed in Vancouver, Canada in 1978, has been led by relentless Joe ‘Shithead’ Keithley (vocals, guitar).

Their music is full of uncompromising, politically committed statements concerning such topics as anti-globalism, anti-racism or freedom of speech. Alongside such bands as The Germs, Black Flag and Negative Trend, D.O.A. are considered to be forerunners of the hardcore music genre. Many later crews such as Red Hot Chilli Peppers, Green Day, Rancid or the Offspring claimed to be influenced by D.O.A.

They collaborated with Jello Biafra and recorded for his record label, Alternative Tentacles. In Poland in the 90., their albums in vinyl, cd and cassette editions were released by QQRyQ Productions.

D.O.A. have been releasing their records by their own label, Sudden Death Records, for a long time (their discography includes 24 albums).

Their first two albums – ‘Something Better Change’ and ‘Hardcore 81’ are numbered among the five best Canadian punk albums ever. On the 22nd of December 2002 – the 25th anniversary of the band – in order to honour their commitment, the mayor of Vancouver announced that date the Day of D.O.A.

TZN XENNA /POLAND/ TZN Xenna is a band, which music activity dates back to 1981. The band was formed by Zygzak, Czombe, Gog and Marek and finally split in 1987. Throughout those six years, musicians such as Sidnej, Falconetti and Dynia also performed alongside. Since 1984, one of them – Falconetti – along with Marek collaborated on unique sound and numerous compositions of the band. Their compositions such as ‘Bankier, officer, polityk czy ksiądz’, ‘Miasto’, ‘Ola, Ola, Ola, lej’ accompanied by Dynia`s drums and Zygzak`s vocal have made everyone shudder up till now. Dynia, who played with the band since 1984, perfectly fitted in with TZN Xenna`s new sound. They - Marek, Dynia, Zygzak, Falconetti - released their first vinyl production – 7’’EP ‘Dzieci z brudnej ulicy’. The album also included a song ‘Ciemny Pokój’. Two songs ‘Gazety mówią’ and ‘Nasz świat’ were included into the compilation ‘Jak Punk to Punk’. Both productios were released by the Tonpress label. 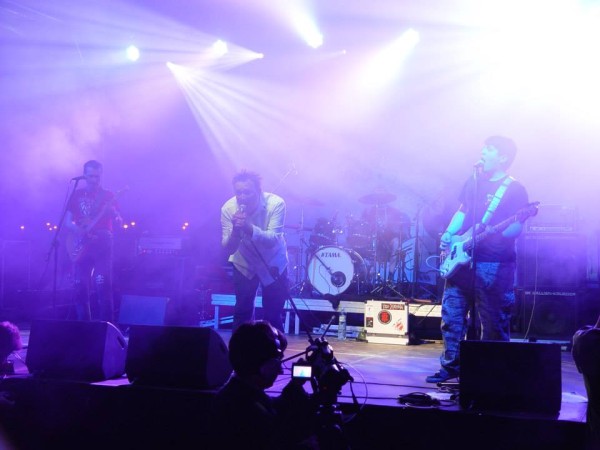 Since 2010, the band, consisting of Tele Kesur, Dynia, Klaus and Zygzak, started over their stage activity. Their performance at the ‘Rock na Bagnie’ festival was widely acclaimed. Apart from hits known from the eighties, they played a new song ‘Kałasznikow’, which became the harbinger of a new opening of the band`s charter. The gig that took place in 2011 was a first step to launch a series of club meetings with audiences.

Enthusiastic reception given to the band by fans of any age confirmed musicians in their decisions about getting back on stage. In 2011 after 24 years, TZN Xenna did a gig in Warsaw. The gig in Punkt & Radio Luxembourg attracted more than 800 people. The audience shouted themselves hoarse while singing the band`s hits. ‘Kałasznikow’ and’Wolacy’ also received a really warm welcome and during encores GoGo Szulc (first drummer of Xenna) performed ‘Guma’and ‘Religia’.

In 2011, the band released the second album ‘TZN Xenna 1981-2011’. All edition had been sold out in advanced booking before the very recording was made.

Frozen city of Poznan had a pleasure of hosting the premiere concert promoting the long-awaited album. During the gig the high temperature was recorded. Apparently, the band and the audience was warming themselves up. Mutual energy exchange resulted in three fantastic encores. The band did three gigs in the cities of Cracow and Wroclaw the same month. The Cracow gig was particularly impressive.

In April 2012, the band recorded material for the third 7’’EP ‘Ścierwo’. That time, the premiere was given at the D.I.Y Hardcore Punk Fest. In July Xenna delivered performance in ‘Ucho’ – a club in the city of Gdynia. The producer of both albums were the Refuse Records and TZN Annex labels.

In 2012, TZN Xenna performed at the Jarocin Rock Festival for a first time. The band was one of few, which managed to promote themselves without the Festival stage as the promoting ground. That year, the band went to Berlin where they delivered their first international performance, which turned out to be a success. More than 200 people held the pogo dance. And it wasn`t the end of international gigs.

In 2012, the band performed in the London Bristol County Sports Club, which was filled up with Poles, who remembered the band from the eighties and those, who were willing to see them live. The next day, Xenna along with fans went to London, where even autumn weather was overwhelmed by enthusiasm and atmosphere of the gig. Englishmen that watched the gig were pretty impressed. It was nice as London might be considered as the punk rock capital.

In 2012, TZN Xenna released the first studio album ‘Dziewczyny w Pogo’ comprising 7 new compositions and 6 renowned smash hits. Funnily enough, it was the first study album released over 31 year-old history of the band. The album was released by the Fonografika label.

The last gig in 2012 was did in the Warsaw Punkt & Radio Luxembourg club. The next year, the band was struck by an unpleasant surprise – the drummer, Klaus, decided to leave. As a result, Krzysiek Pankiewicz joined the band. He had only 48 hours to get a gist of music, but apparently it came off well, as they had to play three encores.